A lot of people ask me about Alaska. Yes, Fairbanks in the summer is pretty much daylight all the time. At the spring and fall equinoxes, 12 hours between sunrise and sundown. In December, the sun might peek above the horizon long enough to give you a few hours of dusk. Here’s some information on that. This photo shows the path of the sun right on the Arctic Circle on June 21. 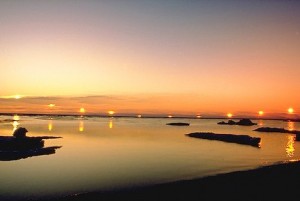 The coldest it ever got where I was (Tok, Alaska) was -78°F one night. We went outside to push a car into the garage in the morning at -73°, so -73° was the coldest I have ever been outside. We were actually checking the temperature all night hoping it would dip into the -80’s, but it never did. The coldest I ever actually spent the night outside was somewhere south of -50°F, during an Arctic survival exercise. I didn’t sleep well. And no, those are not wind chill temperatures.

That usually covers the initial round of questions.

My father was a B-25 pilot in World War II. After the war, he did several interesting things, two of which involved the far north. He spent a few months on the Arctic ice pack, and subsequently worked at the Ballistic Missile Early Warning System (BMEWS) station in Thule, Greenland. He must have managed to really piss somebody off at some point to get those duty assignments! Anyway, after his retirement, he landed a civilian job working for defense contractor RCA at the sister BMEWS site in Clear, Alaska.

This entailed driving his family from his last post at Eglin AFB, Florida, to Fairbanks, Alaska, by way of Philadelphia, shortly after Alaska became a state. It was a very long drive for a family of six in a Ford Falcon Ranchero station wagon pulling a heavy trailer over thousands upon thousands of miles of unpaved roads. I remember two things when we got to Fairbanks. The first was coming around the curve into town was a sign that said “Bob’s Body Works”, to which my mother said, “Well, I suppose Mrs. Bob appreciates that!”

We then drove through straight through town on Cushman Street (the main drag). After passing through town we crossed the Chena River and my older sister asked, “So, where’s Fairbanks?”

And that’s pretty much where I grew up. I went to school at Denali Elementary, Old Main (except we didn’t call it “old” at the time!), and Lathrop H.S., and then on to the University of Alaska, Fairbanks, where I studied music performance (trumpet).

After the BMEWS gig, my father got into the bar/restaurant business. He played organ and piano bar, and was known as Captain Frank Anthony. He actually was a captain, and Anthony was his middle name. Apparently he thought it was easier to pronounce or something. Anyway, he got a lease on one of the old riverboats that had a liquor license. It was called the Riviera Boatel, which we shortened to the Boatel. I lived on the boat (the window to my room was behind the lifeboat in the picture) for several years. The boat burned in 1972, and left nothing but a hole in the ground. The liquor license was still good, though, and somebody built a small cinderblock building with no windows and opened up for business, still under the name “Boatel”. Depending on who I’m talking to, I either grew up on a riverboat in Alaska, or I grew up in a bar. Either way, it was different. Very interesting, though! 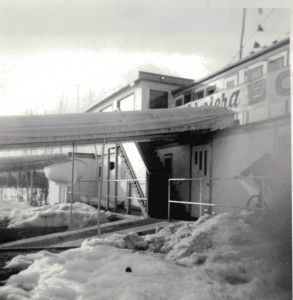 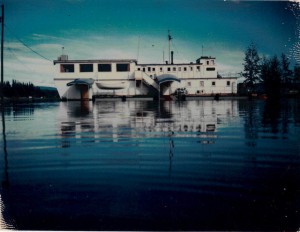 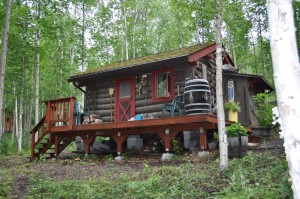 Before I left town in 1976, I lived in a 13′ x 13′ dry cabin (no running water) for several years. The cabin is still there, pretty much just as it was when I left. We stay there whenever we visit what I consider to be my hometown.

Alaska is very different than just about anywhere else. I had firsthand experience of natural disasters; the 1964 earthquake, 1967 floods, broken down vehicles (which can be a life-threatening event). I participated in search and rescue in extremely adverse conditions, and trained in arctic survival. As I mentioned earlier, I got my “40 Below” certificate, mainly because they didn’t have any such thing as a “50 Below” certificate. I know that power, heat and food are things that can go away and stay away. I carried arctic survival gear in my car for three years after I moved to Arizona! After 35 years, one of the boys’ girlfriends was at the house and saw stored water, water filters and rations and asked, “Do you know something we don’t know?”

Let’s just say that when it snows in Atlanta, I’m one of the very few people who don’t panic.

We didn’t have color television until the 1967 flood wiped out the TV station and they upgraded from Black and White. It was a few years after that before we actually bought a color TV. I never knew what “trekkies” meant by the characters wearing red shirts on the original Star Trek show. I didn’t even know the show was in color!

We did not have live network feeds. All of our news was flown in from the Lower 48 and shown 24 hours later. Regular TV shows were weeks behind schedule, so we always had television Christmas specials in January. Sometime in the mid-70’s they brought up live satellite feeds. The kids nowadays are sooo spoiled! Funny how the old-timers used to say that about us.

I had dogs, of course. I think the most I had at one time was nine. I had a 1/2 wolf female named Chat who had wonderful puppies that I would sell to the occasional musher, but mostly for pets. Some of the nicest dogs you would ever want to meet, and would pull your car around if you tied them to your bumper. I used to run them on my bicycle in the summer, three at a time on leashes. They were ultimately too much responsibility and I sold the last of them with much regret. Alaskan racing huskies (much different than pedigreed huskies) are absolutely the best dogs on the planet. I will mention one thing misleading about the linked article. They are correct in that they make awful watchdogs. I only heard Chat bark one time (as in just one bark). There was a moose leaning against the door. You’d have to peel any other dog off the ceiling. On the other hand, one time I was attacked by a BIG mean dog on the loose. I thought I was in serious trouble when Chat hit him from the side. She was half his size, but he left a blood trail as he ran away yelping. Chat just walked back into her doghouse like nothing happened. Also, all my dogs absolutely loved cats. I can’t say the cats loved them back, but the dogs are fine with cats.

Yes there are moose. And bears. And reindeer, although we call them caribou. Wolves, foxes, owls, eagles, falcons, just all kinds of wildlife. Rabbits are everywhere. No snakes, fleas, ticks, or poisonous spiders. I got bit by a black widow when I moved to Arizona because I had no fear of spiders, and I thought it was really pretty. My hand swelled up, but that was about it.

Also, Alaska was where I learned to fly, which is not unusual up there.

And one of the things they don’t often mention about Alaska is the flowers. There are thousands of species of flowers that don’t grow anywhere else. Roses grow wild, as do all kinds of berries. A lot of the plant life is edible. If you like gardening, Alaska in the summer is where you want to be.

Every year, hundreds of thousands of birds migrate through Fairbanks for parts south, stopping at Creamer’s Field on College Road. People come from all over the world to see the sight.

And yes, the aurora is spectacular. No, I’m not giving you a link because I’ve never seen a picture that comes even close to the real thing. You need to go up there when it’s cold, and go see for yourself. If you go up when it’s warm, that means it’s summer. You can’t see the aurora in daylight.

And, of course, there are the people. That is something you can’t describe. I’ve found over the years that if you introduce me to someone who grew up in Alaska, we’ll figure it out in pretty short order even if nobody mentions the word. There are different mannerisms, different ways of thinking about things. Sure there are good people and bad people. Crime can be very high in certain areas. Alcohol and drug abuse are real problems. But it really is the “Last Frontier” and that shows through in the personalities of the people.

And, as one fellow put is, “I love talking to you, Mike. You believe my bear stories!”

He has a point. I suspect hardly anybody believes mine.

For seven years I worked for R&M Engineering and Geological Consultants, mostly on the Trans-Alaska Pipeline. If you look at that link, I worked on many of those publications, or at least on the projects that the publications are about. I was pretty amazed to find them! 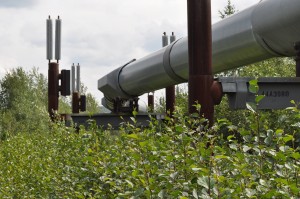 In December, 1976, I left Alaska and drove to Tucson, Arizona. I stopped right at the Canadian border (where the pavement ended!) and checked the temperature.